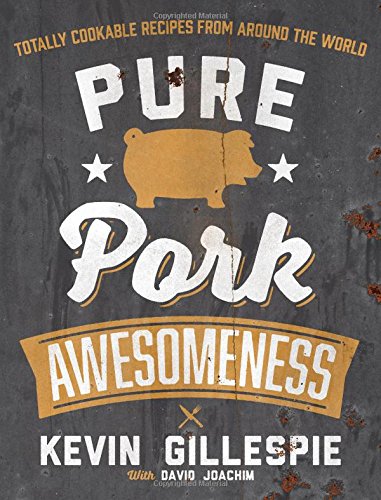 Brand : Kevin Gillespiedavid Joachim
from USA
to Sri Lanka
in 5-8 days
At your doorstep by Jan 22  to Jan 25 with standard delivery

Review ------ I have not been as impressed with a cookbook as I am with Pure Pork Awesomeness: Totally Cookable Recipes from Around the World since Adam Perry Lang published Serious Barbecue: Smoke, Char, Baste & Brush Your Way to Great Outdoor Cooking originally back in 2009. I can’t put this book down. I love it! (Larry Gaian, I Laugh...Lest I Cry) "If you enjoy cooking with pork, Pure Pork Awesomeness is an excellent addition to your cookbook shelf. Professional chef Kevin Gillespie did an awesome job in every aspect with his cookbook." (San Francisco Book Review) Read more ( javascript:void(0) ) About the Author ---------------- Chef Kevin Gillespie's true passion lies in incorporating fresh, organic, and sustainable ingredients in all of his dishes. After graduating with honors from the Art Institute of Atlanta, the Georgia native worked in top restaurants in Atlanta and Oregon before opening his first restaurant, Gunshow, in May 2013. Gillespie was one of the final three cheftestants on sseason six of Bravo's Top Chef and was voted Fan Favorite. He has been named a finalist for the 2016 James Beard Foundation's Best Chef Southeast, nominated for Food & Wine's People's Best New Chef and named to Forbes' 30 Under 30 for his outstanding accomplishments in the restaurant industry. As a rising young culinary star who was bringing more than just good food to the table, Gillespie was named one of Mother Nature Network’s top 40 Chefs Under 40 in November 2009 for linking farms to forks and promoting better health for people and the planet. In February 2010, he was honored as one of Gayot.com's Top Five Rising Chefs. His debut cookbook, Fire in My Belly, was selected as a James Beard Award F\finalist. Gillespie is a member of Slow Food Atlanta, Southern Foodways Alliance, Chefs Collaborative, Community Farmers Markets Chefs Advisory Board, Georgia Organics, and the Society for the Preservation of Traditional Southern Barbecue. He owns three restaurants: Gunshow in Atlanta which also operates a BBQ catering business called Terminus City, and a second restaurant called Revival in Decatur. It is based on the Southern concept of meat-and-three; just like going to Grandma's for Sunday dinner, but available every day. For more information, please visit chefkevingillespie.com. David Joachim has authored, edited, or collaborated on more than 40 cookbooks. His first book with Kevin Gillespie, Fire in My Belly, was a James Beard Award finalist. His A Man, A Can, A Plan series of books has sold more than 1 million copies. He writes a column in Fine Cooking magazine called "The Science Of...," and he co-owns Chef Salt, a line of artisanal seasonings that feature unrefined salts from around the world. Read more ( javascript:void(0) )
Show More
Reviews

Pure Pork Awesomeness: Totally Cookable Recipes from Around the World

Pickles, Pigs & Whiskey: Recipes from My Three Favorite Food Groups and Then Some
By  andrews mcmeel publishing
4.6
10,939 SLRs
from USA
to Sri Lanka
in 9-15 days

Disclaimer: The price shown above includes all applicable taxes and fees. The information provided above is for reference purposes only. Products may go out of stock and delivery estimates may change at any time. Desertcart does not validate any claims made in the product descriptions above. For additional information, please contact the manufacturer or desertcart customer service. While desertcart makes reasonable efforts to only show products available in your country, some items may be cancelled if they are prohibited for import in Sri Lanka. For more details, please visit our Support Page.