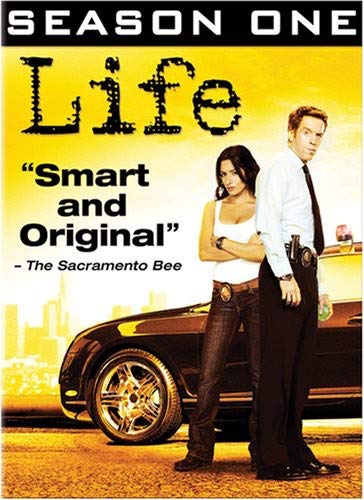 Brand : Life
from USA
to Sri Lanka
in 5-8 days
At your doorstep by Jul 29  to Aug 01 with standard delivery

Life was his sentence. Life is what he got back. Damian Lewis (Band of Brothers) stars as the unconventional police officer-turned-convict-turned-detective with a second chance in each compelling Season One episode of the critically acclaimed mystery series Life. After twelve years in prison for a murder he didn't commit, offbeat Charlie Crews has returned to the force with a $50 million settlement, a new spiritual outlook, a strong fondness for fruit, and a highly unusual approach to solving crime. With the aid of his skeptical and demanding new partner, Dani Reese, played by Sarah Shahi (Rush Hour 3), he's turning police procedure upside down in this unique and fast-paced series with a "terrific cast [and] terrific writing" (Mary McNamara, Los Angeles Times). .com ---- A quirky drama with moments of startling originality, Life: Season One concerns Charlie Crews (Damian Lewis of Band of Brothers), a cop who spent 12 years in federal prison for murders he did not commit. Exonerated by DNA evidence, Charlie receives a multimillion-dollar settlement for his troubles and returns to his old job, though now as a detective. Cleared of the crime, Charlie still faces skepticism from his law enforcement brethren and the impatience of a new partner, Dani Reese (Sarah Shahi), a former drug addict squeezed by her superior (Robin Weigert) to find reasons to boot Charlie from the force. None of this hostility, however, compares with the terrible time Charlie experienced behind bars, where a former cop is everyone's punching bag. Charlie's sanity, saved by studying Zen methods of non-attachment, remains with him after he is released into a digital world, Charlie has a lot of catching up to do, but it is his post-prison unorthodox manner and tendency to speak without thinking that prove jarring for colleagues and crime witnesses. Still, it is easy to root for the guy and appreciate (non-attachment aside) his fondness for the good life: a mansion, fast cars, beautiful women, and lots of fresh fruit. The pilot episode is a knockout, the kind of show featuring moments one has never seen before, such as a scene in which Charlie is forced to shoot a suspect and then talks him through an almost dream-like death. Subsequent episodes are a little uneven in quality, but the overall package is quite compelling, particularly as Charlie quietly solves the mystery of the murders for which he was blamed. Throughout, Charlie's religious transformation in prison collides with his darker impulses toward possible revenge, making Life a fascinating study in conflict. --Tom Keogh
Show More
Reviews

Disclaimer: The price shown above includes all applicable taxes and fees. The information provided above is for reference purposes only. Products may go out of stock and delivery estimates may change at any time. Desertcart does not validate any claims made in the product descriptions above. For additional information, please contact the manufacturer or desertcart customer service. While desertcart makes reasonable efforts to only show products available in your country, some items may be cancelled if they are prohibited for import in Sri Lanka. For more details, please visit our Support Page.